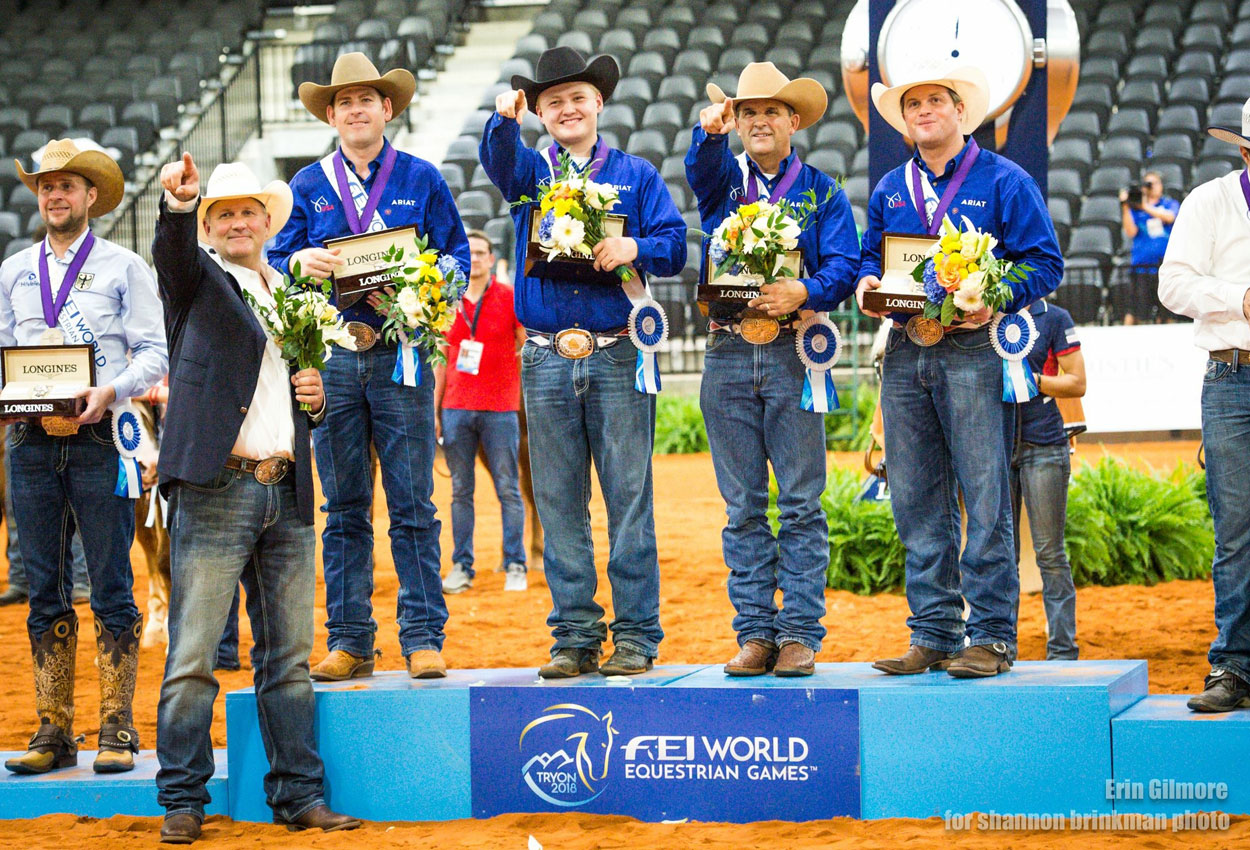 Deary and Heavy Duty Chex (Nu Chex To Cash x Rondas Tio x Teninolena Badger) kicked off Team USA’s efforts from the 12th draw, marking a big 223.5. At the time, that score was tied with Ruf Lil Diamond and Grischa Ludwig, of Germany, for the top score in the class.

“I was hoping I could give the team a little bit more. I thought my horse was really good,” Deary said, admitting he had hoped to mark a little higher. “My job was to give those guys an opportunity to go show their horses as impressively as possible.”

Deary needn’t have worried about his score, as from draw 25, 18-year-old McCutcheon rode Custom Made Gun (Colonels Smoking Gun [Gunner] x Custom Made Dunit x Hollywood Dun It) to a huge 229. The score went untouched the rest of the round, putting Team USA’s youngest rider at the top of the entire class.

“I was really nervous, but having all these guys at the gate with me helped,” McCutcheon said of how he felt before riding into the pen. “Words of encouragement made a big difference.”

“Everybody on the team is a huge support to each other,” added Larson, the only rider on the team who is a previous WEG medalist. “[We were] just telling Cade to be himself and just be confident; we knew he could do it. Just support him.”

The Team competition was broken up into two sections. Huss and Ms Dreamy (Magnum Chic Dream x A Gal With A Gun x Gunner) entered the pen as draw 43 in section two to ride to a 226.5. At that point, Team USA’s lead seemed to be cemented. Since only the top three team members’ scores are added to the team score – the lowest score out of four is dropped – all Larson could do was add points if he marked a higher score than one of his previous teammates, which he did.

Larson and ARC Gunnabeabigstar (Gunnatrashya x Wimpys Little Chic x Wimpys Little Step) rode to a 225.5. Deary’s 223.5 was dropped from the team score, and the U.S.’s composite 681 took the gold medal by 9.5 points.

“Obviously, the strategy for us was to just go mark as much as you could mark, but the heat obviously was a factor,” said Team USA’s Chef d’Equipe, Jeff Petska. “That’s where our riders are tremendous horsemen – they know their horses well. In this situation, we have to really give credit to Dr. John Newcomb and our grooms. They do such a great job of monitoring these horses, keeping them cool, keeping them comfortable, just doing all those little things.

“We’ve been very fortunate to be successful five times and win the gold medal,” Petska continued. “I think what separates us is the horsemanship of our riders and obviously the quality of these horses. I hear our riders and our vet and grooms talking about the horses – ‘Is he happy? Is he comfortable? Is he feeling good? Is he fresh, is he a little too tired?’ All those little subtle things that make so much difference – everything at this level matters.”

Taking the silver Team medal was Belgium, which was represented by Gunners Snappy Chic and Cira Baeck; What A Wave and Bernard Fonck; Smart N Sparkin and Dries Verschueren; and Made In Walla and Ann Poels Fonck. Belgium scored 671.5 points overall, bolstered by What A Wave’s 226.5 and Made In Walla’s 225.5.

Now that the Team competition is complete, the Individual qualifier will continue on Thursday, Sept. 13. The 15 riders who marked a 221 or higher during the first round, including Team USA’s Deary, McCutcheon, Huss and Larson, already moved on to the finals, to be held Sept. 15. Entries that marked a 217-220.5 during the first round will have a shot at the final five spots during the second qualifier.

Though Heavy Duty Chex’s score was dropped, Deary was happy with his performance. The stallion, who is a homebred owned by Hilldale Farm, was originally shown in the Non-Pro by Sarah Locker, who made the 2014 National Reining Horse Association (NRHA) Futurity Level 4 Non-Pro finals and then won the National Reining Breeders Classic Level 4 Non-Pro finals two years in a row.

“He’s just kind of been a real solid, sturdy animal through the whole process, and they’ve been great to work for, so I appreciate the opportunity to have that horse here and what Tammye’s [Hutton, of Hilldale Farm] allowed me to do,” Deary said. “David Hutton’s been my groom here and he’s done all the work for me, so it’s been a great experience overall.”

Likewise, McCutcheon has a long history with his partner in the pen. Custom Made Gun was originally trained by his breeder and McCutcheon’s grandfather, Tim McQuay. McCutcheon took over the ride when the stallion was 4 years old.

“He’s always been real good to me,” McCutcheon said of Custom Made Gun. “He’s real honest in the show pen, like Dan’s horse is. He’s a once-in-a-lifetime horse for me at this point.”

Custom Made Gun will soon have a new partner, as the stallion is being offered in the McQuay Dispersal Sale during the Legacy Reining Breeders Sale at the end of September.

Huss has been riding Jana Leigh Simons-bred Ms Dreamy solely for a year-and-a-half in preparation for the WEG. The double-registered mare doubled up with Huss in the Open and owner Rick Christen in the Non-Pro during her limited-age career, winning several major titles.

“This was a long-term project for my team, consisting of my wife, blacksmith and vet,” Huss said. “That way we could know what works and try to get her to be as honest as she could. That’s her trait. She gets in the pen and she listens and she tries to stay with you. She might not be the fastest-spinning horse in the class, but she makes it up in other areas.”

Team USA’s anchor members, ARC Gunnabeabigstar and Larson, have been together since the stallion was a 2-year-old. Bred by Arcese Quarter Horses and owned by HDC Quarter Horses USA LLC, “Big Star” and Larson won the 2014 NRHA Futurity Level 4 Open Co-Championship together.

“He’s the best horse I’ve ever shown for sure,” Larson said. “He can be a handful at times, but it’s not because he wants to do anything wrong; he’s just trying a little bit too hard sometimes. He’s taught me probably more than I’ve taught him, and he’s been just a huge blessing to my family. I would not be here without the support of my family and the people at home working hard taking care of everything.”