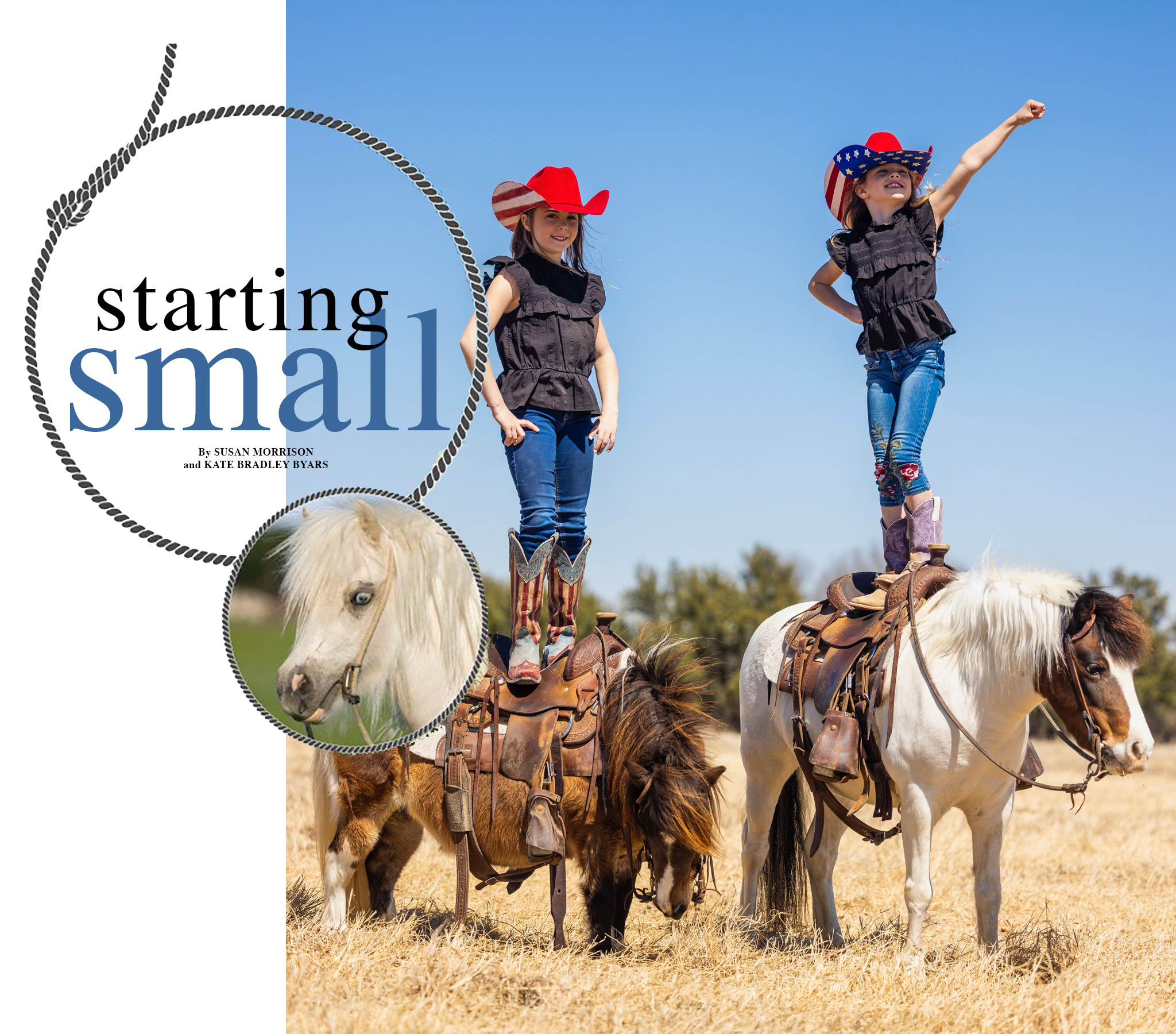 You might think the two young boys riding across the pasture, laughing and bumping into each other on their pint-sized equines, were just a couple of kids out having fun. In fact, each have five-figure bank accounts earned from training and selling miniature horses and ponies.

It’s an everyday business for Wyatt and Owen Deary, who started training about four years ago. They’ve since earned a reputation for developing safe, gentle mounts for young riders. So have Hannah Rose Kelley and her little sister, Ruby Jo, and brothers Stran and Hayzen Hunt. These young people are the next generation of trainers, learning lessons that go well beyond the time they spend in the saddle. 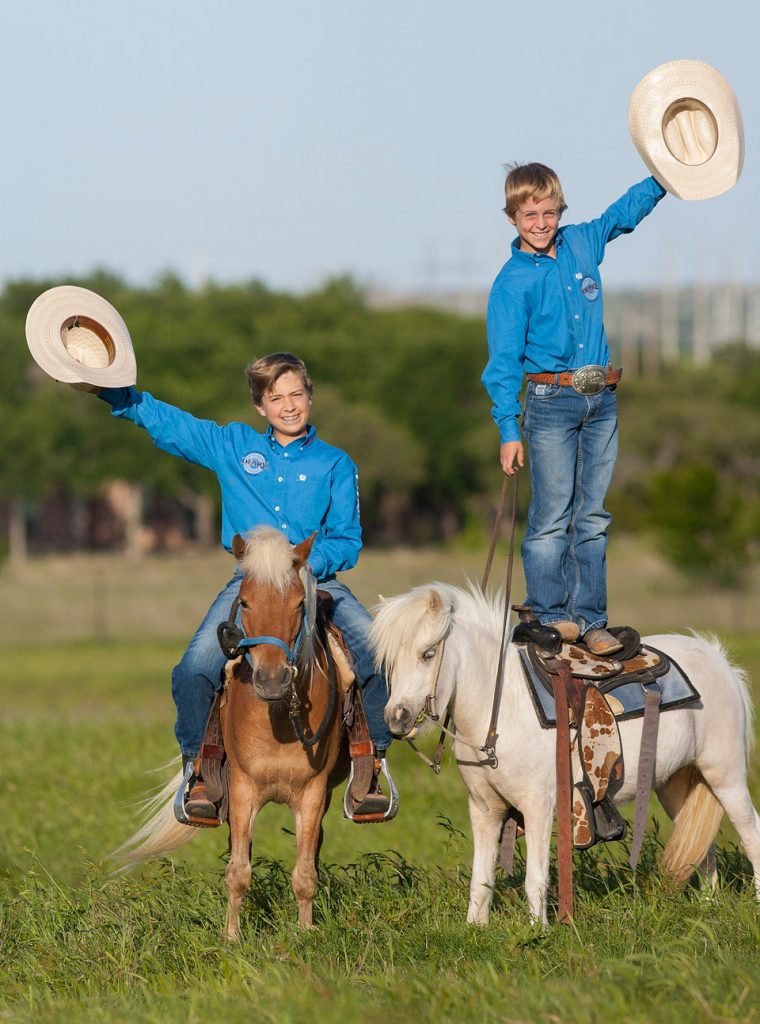 In an arena that’s success usually full of superstar reining horses and potential champions, it’s common to see two young boys on miniature horses or ponies riding alongside their dad, trainer and National Reining Horse Association Futurity champion Casey Deary. Those small equines may never win a reining class, but by the time Wyatt and Owen Deary are finished with them at Deary Ranch in Weatherford, Texas, they’re ready to take care of a new young rider.

It started when Owen realized his older brother was building a bank account by helping sell the Border Collie puppies the family was raising. The work Wyatt put in with the puppies had paid off in the form of a college account. Owen, then 5, wanted a way to make his own money, and after a couple of his suggestions—including raising foxes— didn’t pan out with his parents, he said he wanted to train ponies.

“He begged and begged, and finally Owen and Casey went to [NRHA Hall of Fame member] Bob Loomis, whose wife, Pam, had a herd of miniature horses,” says the boys’ mother, Nicole. “They bought a little paint. We had helped Wyatt get started with the puppy deal, so we told Owen, ‘We’ll get you started, but this is your business.’

“That mini was wild. She bucked. He worked and worked, and he wanted to quit but we told him he was going to finish what he started. And Owen got that mini broke. That’s how it began. 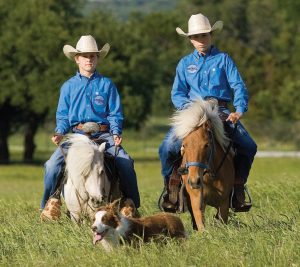 “They bought her New Year’s Day [in 2013]. When summer came he rode her a lot. She would change leads and do some reining maneuvers, and you could trail ride on her. She became very kid-safe. All of my kids would play with her.”

After asking around about market value, Owen priced the mini mare, named Fruit Loop, at $3,500. The family made a video, put it on Facebook, and within an hour it had 14,000 views, Nicole says. A woman bought the mini on the condition that Owen keep riding her until Christmas, paying a little extra for the additional training.

“I was so proud of Owen for finishing the job,” Nicole says.

Now-9-year-old Owen says although he “got bucked off a whole lot,” he also learned a lot from training Fruit Loop, and that’s helped him with the minis he’s trained since.

Wyatt, who had made about the same amount of money from the puppies as Owen had made on one pony, decided he wanted to buy a pony to train. Wyatt’s first training project was a mare named Fireball. 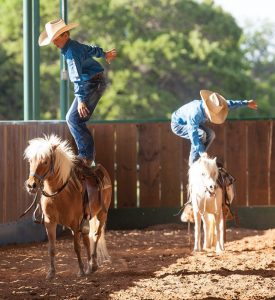 “She was really good,” says the 11-year-old. “I could rope the dummy [on her] and I would jump on her, and we did the trail riding. I rode through the water on her.”

The brothers have now bought and sold 13 minis or ponies, and ridden them countless miles around the ranch. Their time and effort have paid off in a big way, and they’ve learned to run their training operation as a true business.

“We have their savings account and they pay the expenses, buy new ponies, and they also tithe at church—we believe that’s important—and they’ve had to pay taxes,” Nicole says. “But they both have a mutual fund, saving for college. It’s amazing to start something when you’re 5 and have a business. But people come up to us and say, ‘We want a pony that the Deary boys have trained.’ ”

“We’ll hobble their feet, and I make sure before [the boys] get on that I’m holding them on a longe line or they’re holding [each other’s pony],” he says. “These things act like a real horse, so we treat them like big horses. It’s as close to training a regular 2-year-old as anything you can do. They’ve got to stop, back up, turn both ways. Most of them, by the time they leave, can change leads. It’s not a proper lead change, but they’re broke enough that [the boys] can go the other way and kick, and they’ll change leads. They’ll pen steers on them. They’ll swing a rope on them.” 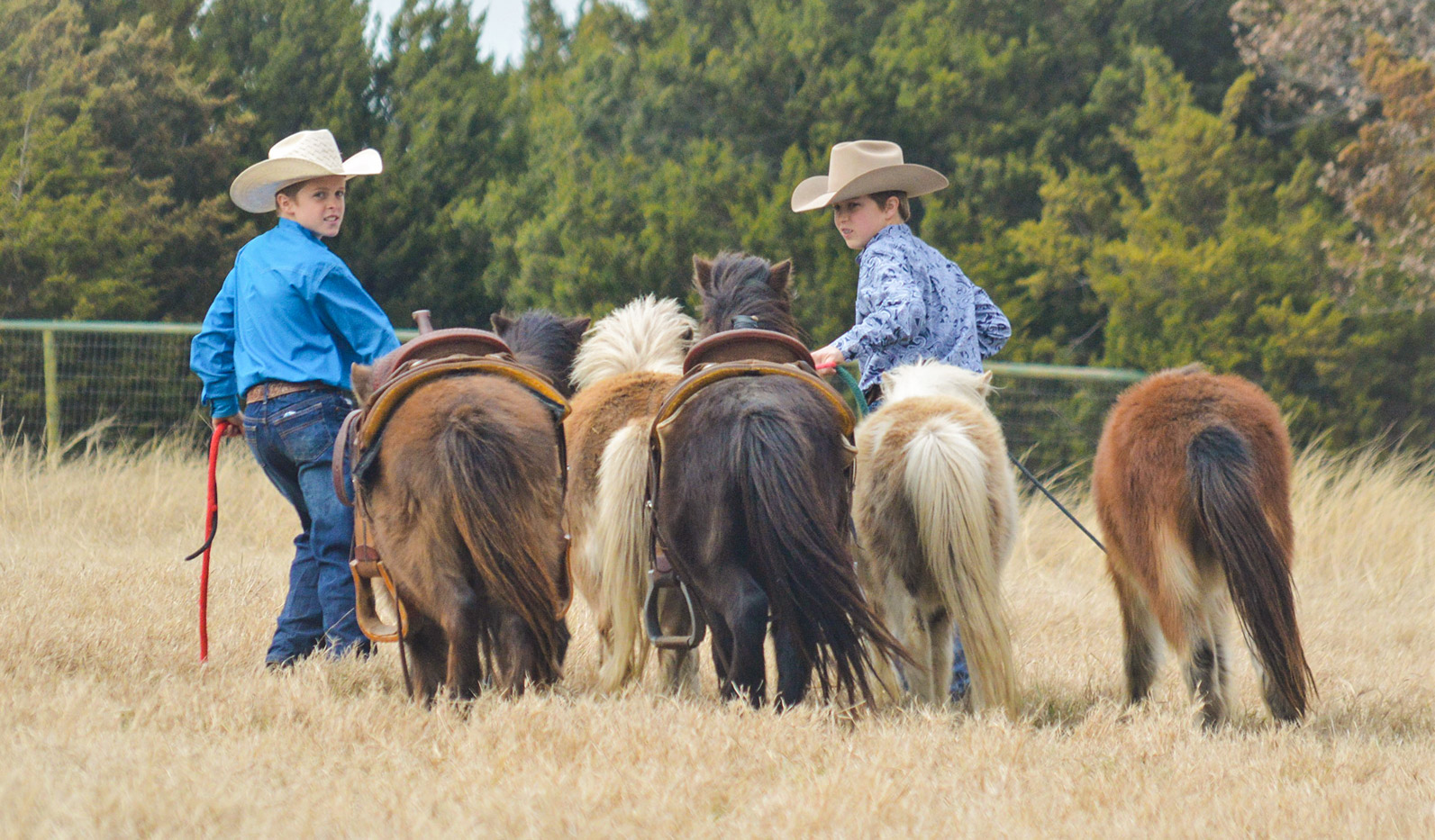 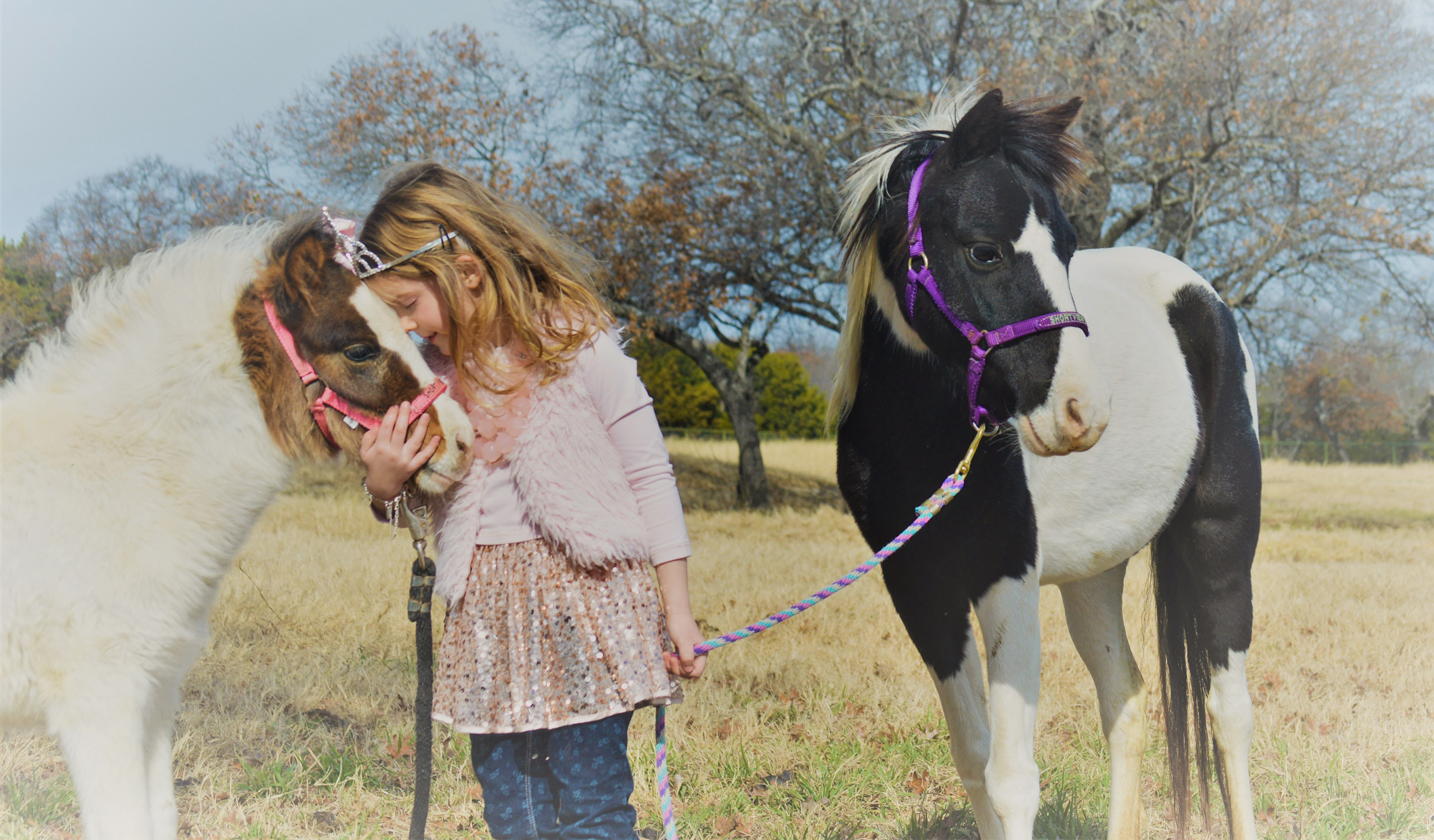 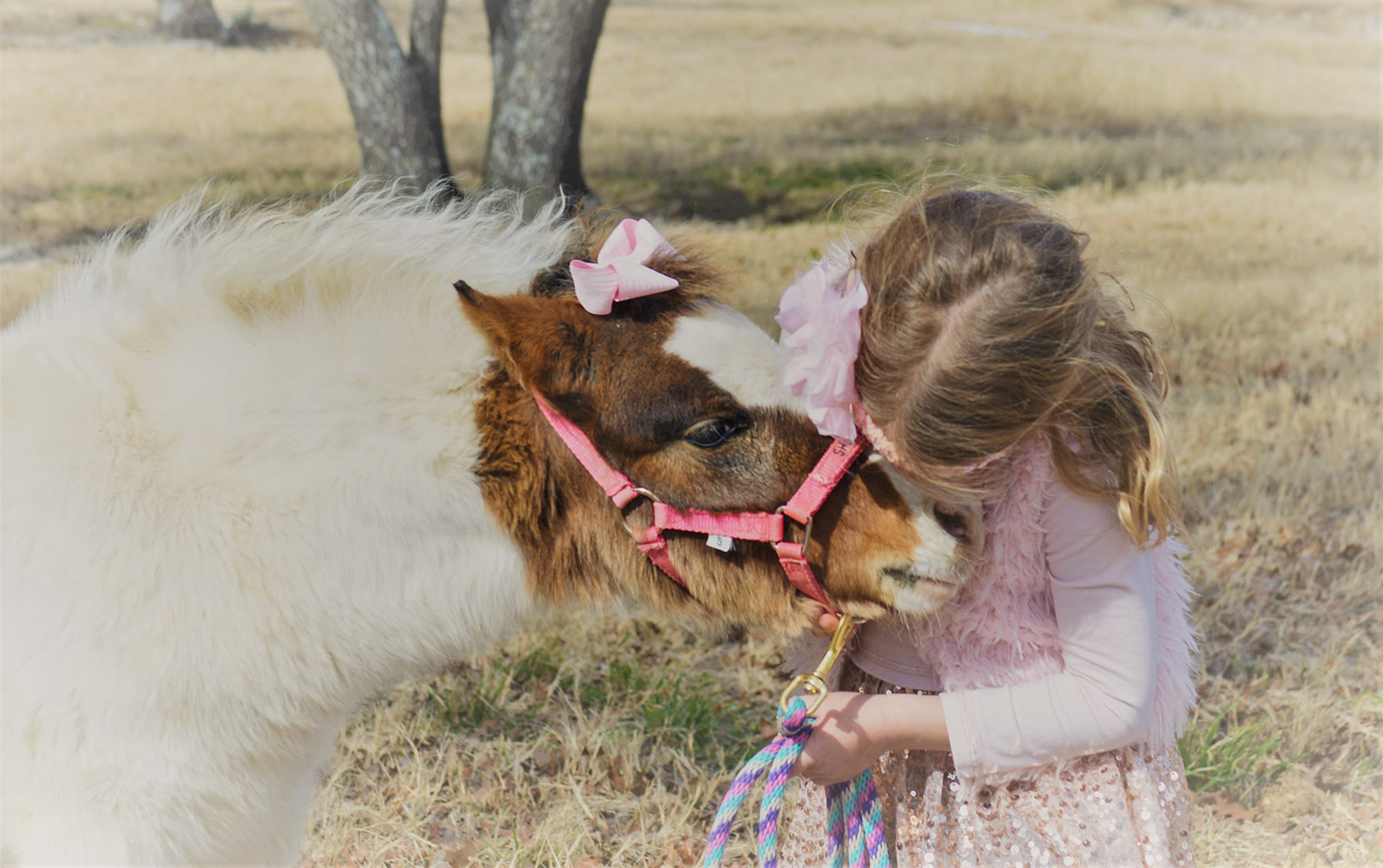 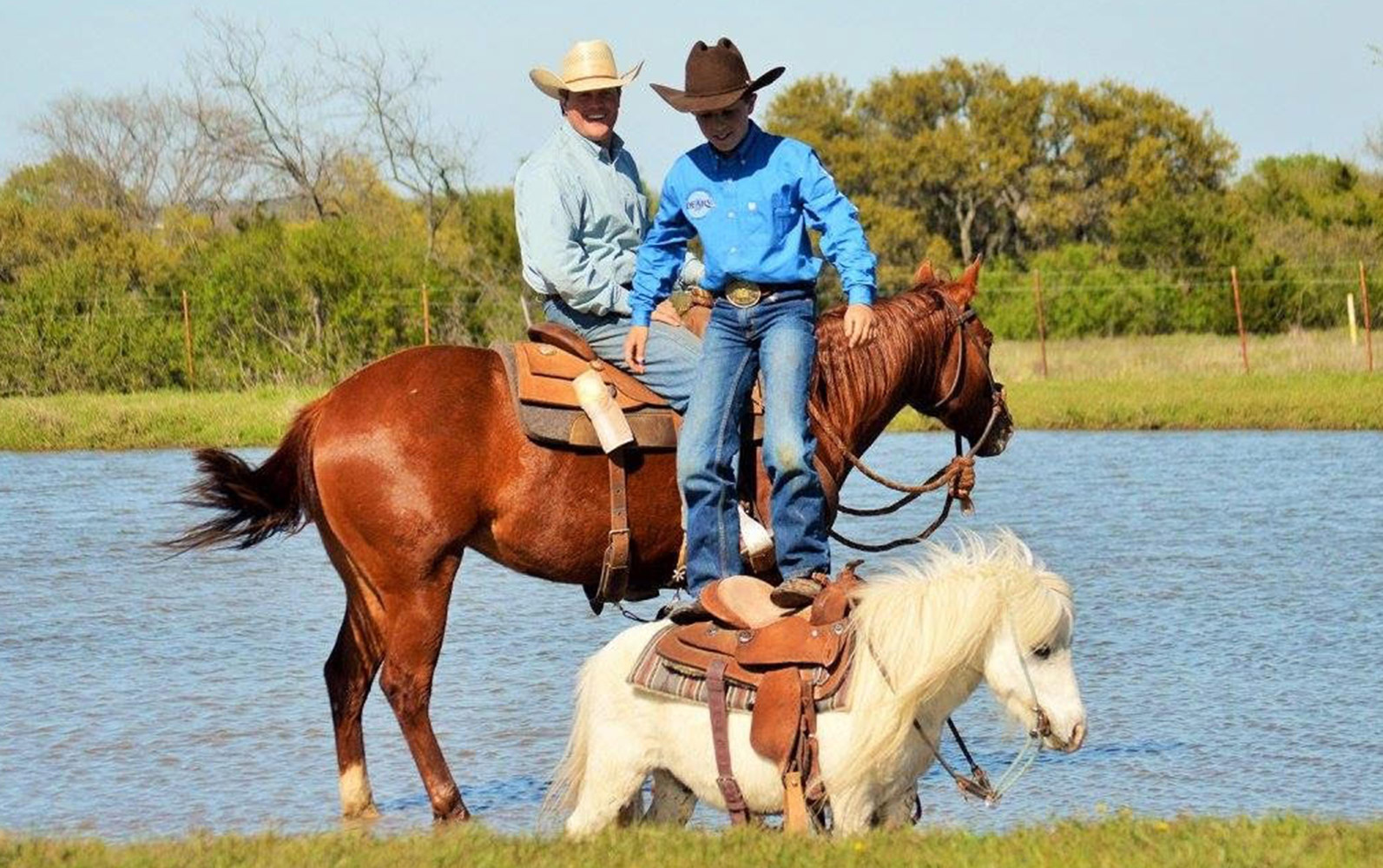 Nicole says the minis have to be safe in the arena and the pasture. Wyatt and Owen’s sister Joy, 5, helps her brothers be sure the little horses are used to small children handling them. It won’t be long before 2-year-old Olivia is in on the training, too.

“Before they go, we want to be sure our little girls can ride them,” she says. “We don’t want to send them off if they’re not totally safe.” 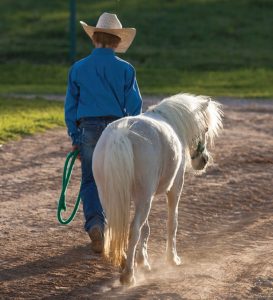 Watching Casey’s team of assistant trainers ride has helped the boys with their own training.

“They watch the team ride and train 2-year-olds all the time,” she says. “They pick up things by watching the rest of the riders. And they help each other a lot. They’re learning as they go, and now they work together. And we’re all right here watching them.”

Both of the boys say riding minis has helped them in other ways.

“I feel like it’s helped me with balance in baseball,” Wyatt says.

Wyatt and Owen both compete in reining on older, solid show horses, Nicole says, adding that riding the minis also has benefited both boys in the show pen. Wyatt started showing reiners when he was just 5, and Owen began showing last year.

“Owen had told us he couldn’t show, and that he didn’t know how to do the pattern, so he had just ridden the minis,”Nicole says. “The pattern came natural to Wyatt. Owen was always just watching and he kept training his minis. Then he’d ride a big horse and we were like, wow! The minis have taught them both how to sit square, use their legs and have feel on a horse.”

The experience the boys have gained has taught them about more than just training and showing horses, their parents say.

“They understand the more time they put in, the more broke they get the ponies and the quicker they’re reaching their goals,” Nicole says. “Every day after school they get something to eat and then ride their minis. It’s an everyday work ethic.”

Casey—who initially tried to talk Owen out of the pony project—says he and Nicole are proud of their young entrepreneurs.

“They learn how to communicate with adults and learn the importance of working,” he says. “And they learn how to treat their animals. That’s as important as the riding part.” 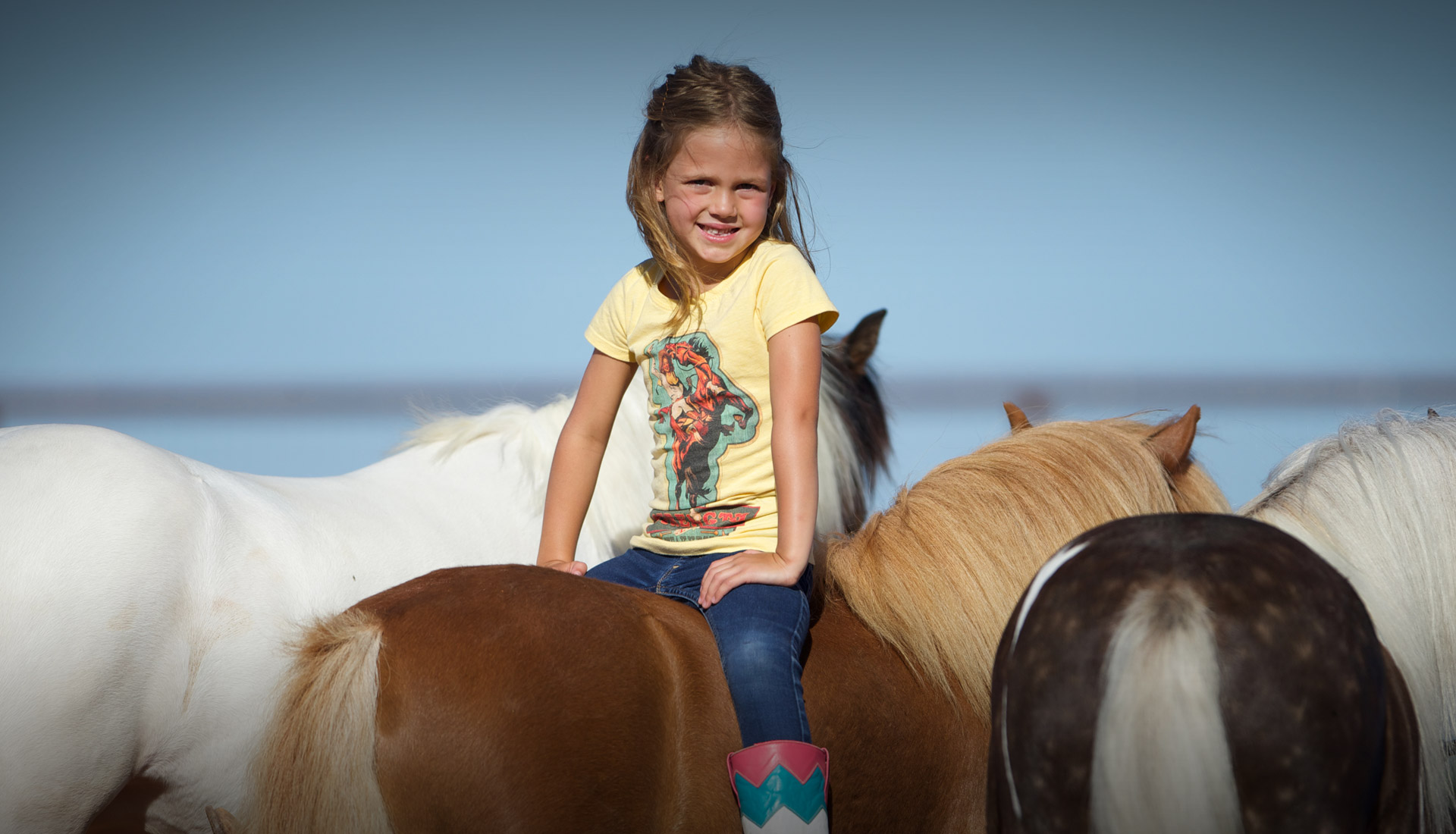