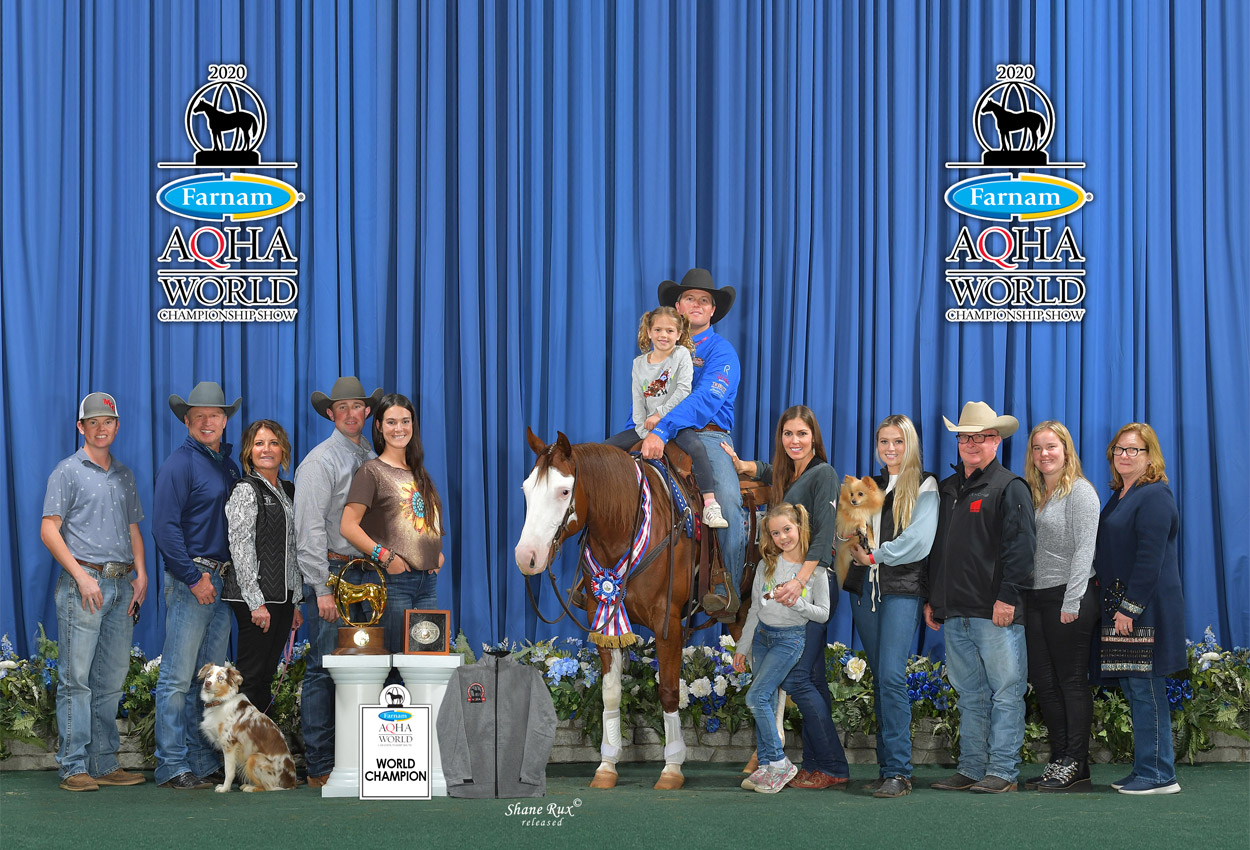 Little did anyone know that the birth of a spindly-legged sorrel filly bred by Arcese Quar- ter Horses at Oswood Stallion Station in Weatherford, Texas would set off a chain of events that would rock the quarter horse world.

NRHA Two Million Dollar Rider Casey Deary was with his good friend and associate Rob Curtis when he got the call that his favorite mare Americasnext- gunmodel’s first foal was born. Deary hung up the phone and told Curtis what the call was about.

“Let’s go look at her, but what ever happens, don’t let me buy her,” Curtis said.

To which, Deary replied, “We’re not going to buy her, I just want to see her.”

They saw the filly, and little was said that day; however, the next day, Rob called Casey and asked an odd question, “Did you have any dreams about her?”

Casey simply replied, “Rob, I’ve only felt that way about one other female in my life, and I married her.” The deal was doneand Rob purchased Americas Supermodel. The filly grew up at Oswood Stallion Station until she was ready to start training. She progressed well through training, so well that she caught the eyes of Deary’s other clients, Lyle and Marie Whitmarsh from Canada. The Whitmarshes bought the filly early in her two-year-old year.

Americas Supermodel won the AQHA Congress Junior reining by a large margin catching the attention of Arcese Quarter Horses, her original breeders and the owners of her dam. The Whitmarsh’s were reluctant to sell, but finally agreed to sell half interest in the promising mare, and the Whitmarsh Arcese partnership was formed. Late that November, the team set off to the NRHA Fu- turity with high hopes. “She pulled a front shoe in the first go-round and got pretty body sore all over, so I didn’t feel like I had her 100 percent like I wanted her at the reining futurity, and she ended up still getting third, I think,” Casey said, then explained, “She is one of those horses that doesn’t have to be all the way right to be exceptional. I always joke that I need a horse that can mark an 80 for me to go mark a 75 on, and she’s one of those. I mean she’s capable of being a 1.5 stopping and she can be a 1.5 spinning. Probably under a better jockey, she would be well over what she is now. I think she’s close to $200,000. It’s nice to have a horse that has the ability to go be off her game a little bit and still be exceptional.”

The team agreed that it was right by the mare to give her a long break after the futurity, and she was rested most of her 4-year-old year. “She was just getting stronger and healthier and maturing mentally. When we brought her back as a 5-year-old, she felt amazing!” Casey explained.

The dynamic sorrel mare by NRHA Two Million Dol- lar Sire Walla Walla Whiz finished second at the National Reining Breeders Classic and tied to win the High Roller Reining Classic in Vegas a week later. She got two weeks at home before traveling to Oklahoma City to win both the go-round and the finals in the Level 3 Junior Reining at the AQHA World Championship Show with a 229.

The 2020 Farnam AQHA World Championship Show was one for the record books. With qualification waived due to the pandemic, entries far surpassed previous years. In ad- dition, for the first time, it was joined by four other AQHA shows: The Adequan Select World Championship, the AQHA Ranching Heritage Challenge Finals, the Adequan Level 2 Championship, and the Nutrena Level 1 Champion- ship. As if that wasn’t enough, the 41st Triangle Fall Horse Sale was also added to the agenda. The world’s best quarter horses came from all corners of the world to compete for 99 Farnam AQHA World championships, 44 Adequan® Select World championships, 85 Adequan® Level 2 cham- pionships, 22 AQHA Ranching Heritage Challenge Finals championships, and 40 Nutrena Level 1 Championships.

Deary had a long list of people to thank as he said, “It is impossible to name all of them. Obviously, my wife is my biggest cheerleader and supporter. I joke all the time about living in a van down by the river, but that’s probably where I’d be if it wasn’t for her pushing on me. My parents have been amazing support, helping with our kids, which with four of those, that’s a full-time job. This is a family business though. My kids have been here helping set up and work- ing here at the stalls. The team of vets that I work for that have spent countless hours late at night helping me get stuff ready, and my horseshoer Glenn Spradling, and my dentist Randy Riedinger, my chiropractors Brent Proctor and Merv Williams. Then none of it would be possible without the amazing owners that support me. There have been so many great owners down the road that have allowed me to strug- gle through and fail and try again.” Casey continued, “To God be the glory for allowing me to be here and do this.”