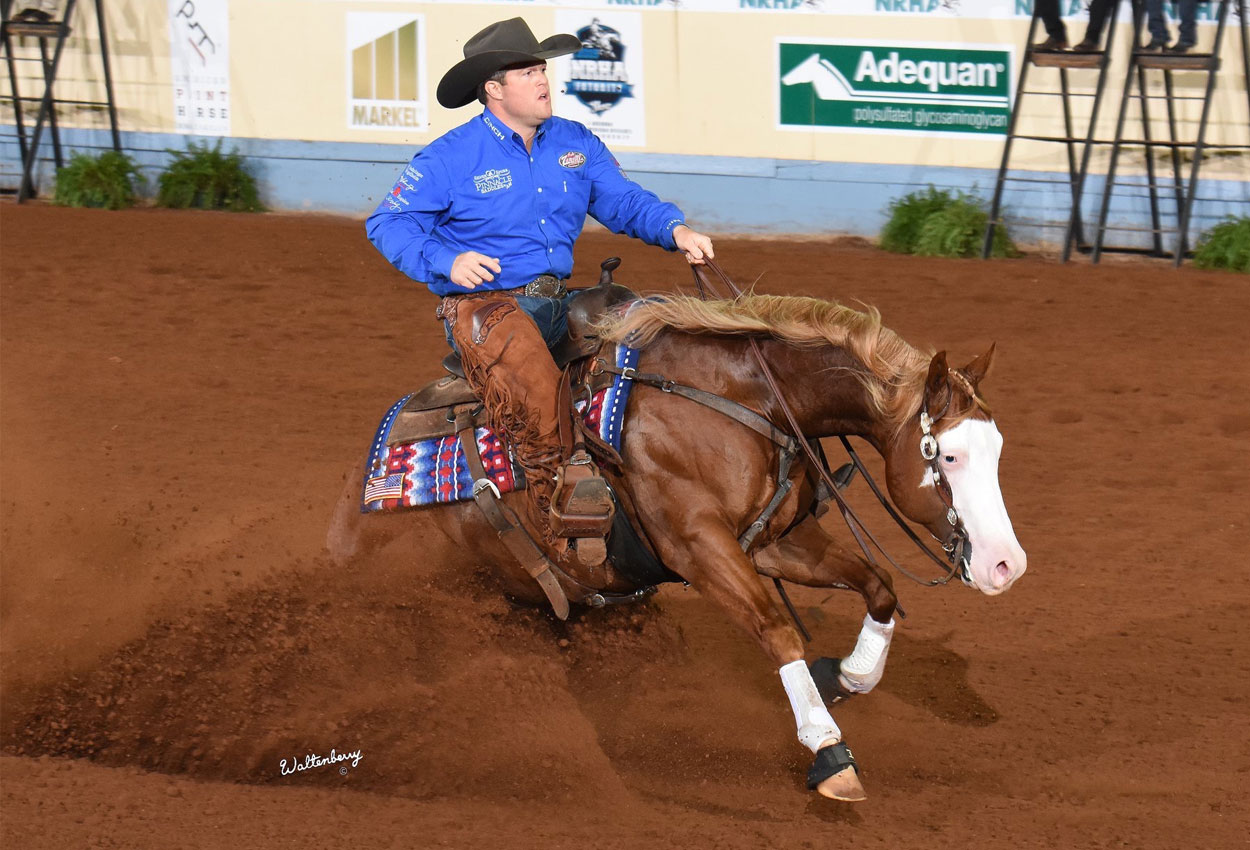 Americasnexttopgun means a lot to trainer Casey Deary. The Weatherford, Texas, trainer not only has an appreciation for the horse’s talent, but a strong connection to the flashy sorrel stallion’s family.

It was a poignant moment when he rode the lauded mare’s son, Americasnexttopgun, to the National Reining Breeders Classic (NRBC) Level 4 Open Championship. It didn’t stop there, as he rode the stallion’s full sister — both are by Equi-Stat Elite $3 Million Sire Walla Walla Whiz and out of Americasnextgunmodel (by Colonels Smoking Gun[Gunner]) — to the Level 4 Open Reserve Co-Championship.

“I knew I had enough horse to win it, so I showed him for what I knew he could do and made sure to not overdo it,” said Deary, who marked a winning 226.5 with Americasnexttopgun. “I loved his mother. She’s the one who changed my career. This horse is amazing and is maybe the most athletic thing I have ever ridden. There is not a weak spot on him, so I’m grateful to finally put it all together.”

While elated about the win, Deary admitted he was exhausted as well. Understandable, of course, because he was riding three horses in the finals, and his friend Jordan Larson had catch rode another of his horses.

In addition to winning first and tying for second on the full siblings, he rode a third horse, Gunnabeabrightstar, to twelfth place. Larson and Lonely At The Top tied for eighth.

“It was a very busy evening,” Deary said. “I have an exceptional group of people I work with, from my vets and my farrier. My wife is incredibly supportive. My owners are amazing. I thank Jordan for riding my other horse. I don’t think there is anyone better in the business than him to step on one and immediately figure out how to ride it.”

Deary added that the Ford Arena and the entire Tulsa facility is a great place to show a horse. The show, which was originally slated for April at its normal host site in Katy, Texas, was rescheduled and relocated due to the COVID-19 pandemic and related restrictions.

“I love that pen. I love to have a horse that can really run, and I like the opportunity to show it off. Tulsa is amazing, the ground is great. The guys who take care of the ground take such good care of us,” he said. “I also can’t say enough good things about Cheryl Cody and her team. To even dream of putting on that many big horse shows together would give anyone a headache, and they have far exceeded our expectations.”

Deary and Americas Supermodel, owned by Whitmarsh Arcese Partnership, marked a 224.5 to tie for Reserve, worth $41,000.

Also tying for reserve were Jason Vanlandingham and NRHA Triple Crown Champion A Vintage Smoke, who are former NRBC Co-Champions and coming off of a big win at the NRHA Derby. Owned by Diane Mesmer, A Vintage Smoke is by A Sparkling Vintage out of Lady Smoke Peppy (Mister Dual Pep).